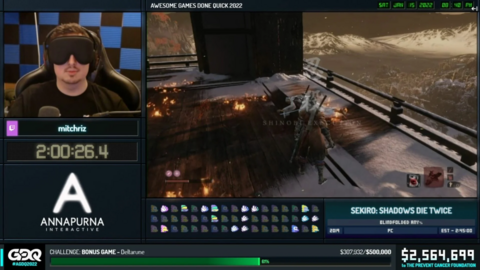 139 speedruns made up this year’s marathon, which began January 9 at 12 PM ET and ended at approximately 2 AM ET January 16. The exact amount raised by the event was $3,416,729, with all donations taken during that same time period.

🏁TIME 🏁
#AGDQ2022 has raised a total amount of $3,416,729 for @preventcancer! This is officially the most we’ve ever raised in the history of @GamesDoneQuick – ANOTHER WR🏆
Thank you to everyone who made this marathon possible, and thank you all for your generosity & support❤️

Highlights of this year’s event included a Pokemon race with one player running Omega Ruby and the other Alpha Sapphire, runs in multiple 2021 releases including Resident Evil Village and It Takes Two, and a blindfolded run of Sekiro: Shadows Die Twice completed in exactly two hours. Multiple world records were also set during the event, including:

Previous: The Tomorrow Children’s Relaunch Can Feature An Island Of Your Creation Via A New Contest
Next: Going Balls Gameplay All Levels iOS,Android Mobile Game Trailer New Update