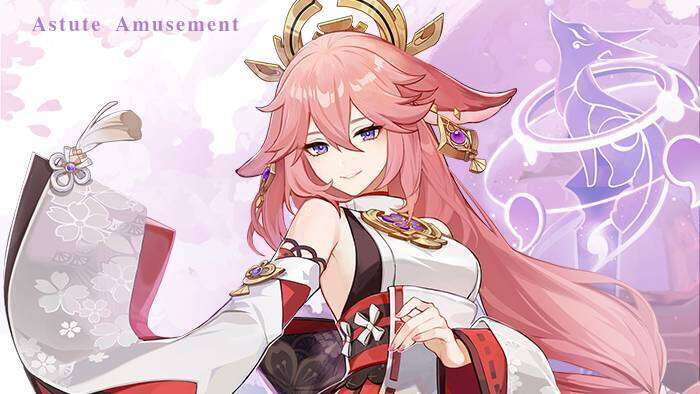 
Yae Miko, Grand Narukami Shrine’s high priestess who moonlights as a light novel editor, was made available to pull in Genshin Impact’s 2.5 update. If you’ve obtained her, then you’re ready to embark on the long arduous journey of building Yae Miko ready for combat. Below are all the resources and their respective locations for Yae Miko’s ascension and talent upgrade materials.

An electro catalyst character, Yae Miko can be made your main DPS–in that case, get her to level 90–or a sub-DPS. If she’ll be support on your team, then level 80 is good enough, especially if you’re F2P and are low on resources. If you’re a newer player, you’ll need to wait until you’ve unlocked the Inazuma area to level Yae Miko up.

If you haven’t emptied out the Souvenir shops yet, you can purchase a limited amount of Vajrada Amethysts from those locations. To farm for Vajrada Amethysts, you’ll need to pick a fight with one of the following normal bosses: the Electro Hypostasis, the Thunder Manifestation (Electro Oceanid), the Bathysmal Vishap Herd, and Primo Geovishap (if infused with electro).

For farming Yae Miko ascension materials, I’d suggest going for the Bathysmal Vishap Herd boss fight. You will need to fight the vishaps anyways for another ascension material drop–Dragonheir’s False Fin–so you might as well kill two birds with one stone.

Plants that grow near the ocean, Sea Ganodermas are plentiful across Inazuma. My own personal farming recommendation–if you’re pressed on time and just want to efficiently farm one location–is to go to the Nazuchi Beach Overlook waypoint and head north to the beach area. There are around 17 Sea Ganodermas in that single location. You can also use the Teyvat Interactive Map to plan your farming routes.

The Undertaker is Now Available in WWE 2K BattlegroundsWritten by Jenny Zheng
February 16, 2022

In general, if you are interested in raising popular Inazuma 5-star characters, it’s a good idea to regularly farm Handguards since they have a low drop rate. In addition to Yae Miko, Ayaka and Raiden both use Handguards as ascension materials.

Dragonheir’s False Fins are dropped by normal boss Bathysmal Vishap Herd. This boss fight is located in new area Enkanomiya and is unlocked by completing The Subterranean Trials of Drake and Serpent.

Teachings of Light, Guide to Light, and Philosophies of Light all drop from the Violet Court domain on Wednesdays, Saturdays, and Sundays.

The Meaning of Aeons

Get this from the new weekly boss, End of the Oneiric Euthymia–the Raiden fight. To unlock this fight, you’ll need to have completed Raiden’s Act II story quest.

Crowns are rare and a coveted commodity in Genshin, so make sure you really, really want to use it on Yae Miko. The general rule of thumb is to crown your main DPS units, so if you’re not sure about where Yae fits on your team yet, I would suggest holding off.

But if you’re committed to Yae, Crown of Insights can be obtained by leveling up the Frostbearing Tree and Sacred Sakura’s Favor. Otherwise, you’ll need to participate in limited-time events to get Crowns. The upcoming one, Three Realms Gateway Offering (02/17) will offer one Crown in the event shop.

GameSpot may get a commission from retail offers.