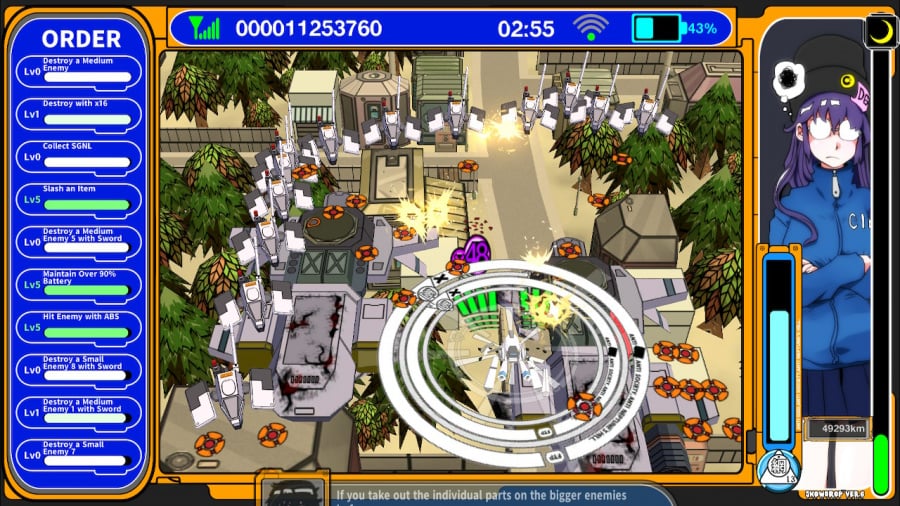 Merriam-Webster defines ‘Swag’, in urban slang terms, as referring to “stylish confidence”, although the origin of the word actually comes from the Scandinavian ‘svagga’, meaning to “rock unsteadily or to lurch”. Radirgy Swag, with its unusual direction and somewhat confusing properties, probably has more in common with the latter — at least until it gets going.

Milestone Inc, Radirgy’s original developer, did quite a bit of lurching as a company, too. Composed of ex-Compile staff (Aleste) they released five shoot-em-up (or ‘shmup’) arcade titles for Sega’s NAOMI hardware between 2004 and 2009, porting three to the Dreamcast and PlayStation 2. Bravely experimental, Milestone’s cult fanbase and its affection for the niche side of Japanese software motivated ports and sequels on a range of consoles, including the Gamecube and Nintendo Wii. In 2013 it all came to a calamitous end when founder Hiroshi Kimura was jailed for illegally selling shares in a Vietnam subsidiary, MS Bio Energy. The staff then resurrected the studio as RS34, preserving Milestone’s lineage with a handful of sequels. 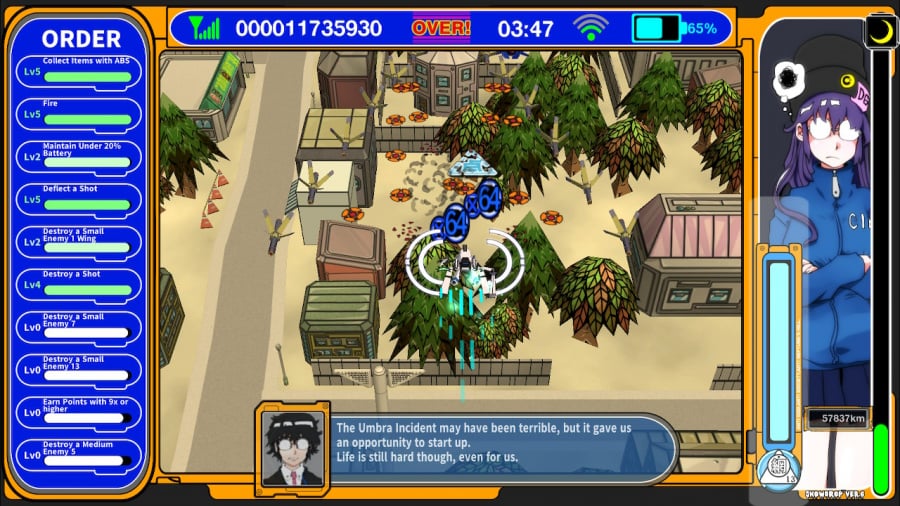 Radirgy Swag’s western release has taken two years, prompting outrage from fans waiting on (the now somewhat unfortunately named) Dispatch Games to finally deliver paid-for goods. Spelling errors and a misgendering crop up in various parts of the text, making one wonder what Dispatch Games have been playing at for so long, but for the most part the translation holds.

Evoking the developer’s innovative approach to video game development, this is the fourth game in a series that toys daringly with genre conventions. Where Chaos Field — Milestone’s first release — only featured boss battles, Radirgy Swag has none. Technically, it doesn’t have stages either, instead fashioned as a seventeen-minute stretch of increasingly intense action in your pursuit to the moon, loosely differentiated by shifts in background.

Plot-wise, protagonist Tadayo Aita is now a refuse collector in space. The employment theme is tied into some of the achievements — or “jobs” — you can complete by fulfilling certain in-game requirements. Radirgy’s cast have a dedicated following, and Swag’s bedroom-themed options screen, stylish motifs and general chatter maintain the series endearingly quirky tone. 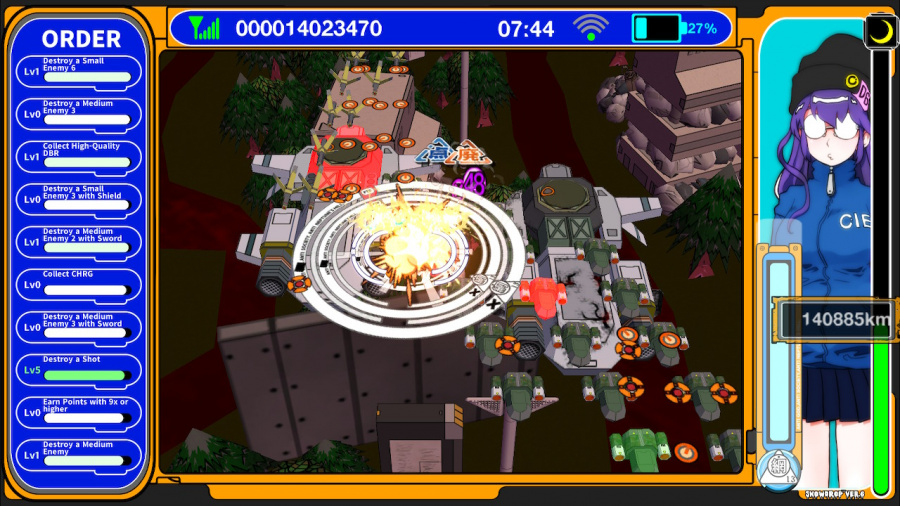 Daisuke Nagata, the composer who elevated Chaos Field with a thumping trance score, is one of RS34’s greatest assets. His knack for modern poppy beats and jazzy hooks help Radirgy Swag pull off its hip “cultural” vibe. And it’s needed, because while visually functional, it’s certainly no feast. Bar shifting the background to a new isometric angle, it sits canon with previous titles, utilising simple cel-shaded graphics, heavy-stroke outlines, and simplistic sprites.

The screen is windowed in tangerine orange, containing a margin of achievements to shoot toward and various instruments to indicate your performance. During the action, conversational bubbles appear at the foot of the display. The messages often disappear too quickly to be fully read and are largely inconsequential fan service, but if you’re desperate to know what’s being said it’s all logged in the option screen’s ‘email’ server.

Understanding the game’s constant stream of changing power-ups, and how you need to accrue them to improve your score and aid your survival, is key. Go in blind and it’s very confusing, meaning your first port of call should be the ‘Digital Manual’: a single, un-zoomable image that vomits instructions everywhere in a font size that requires either a monitor or monocle to decipher. 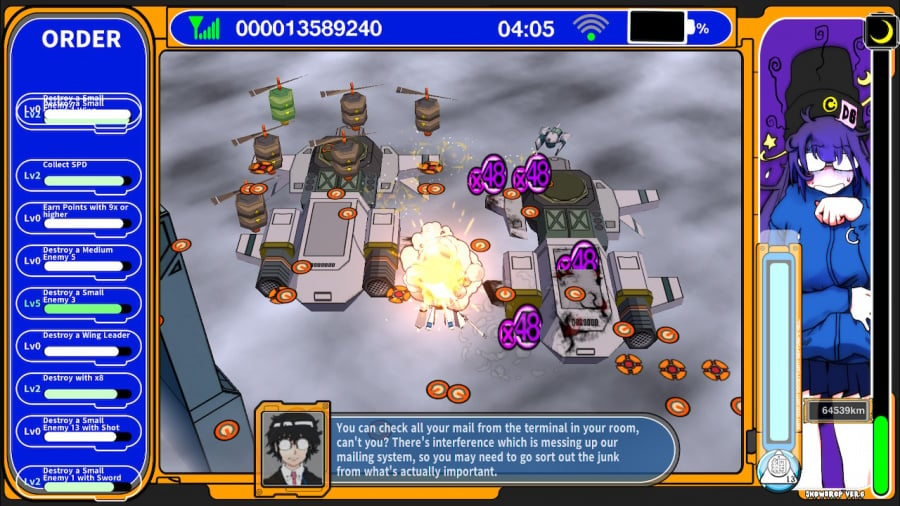 You have a choice of two craft, both touting a sword-swipe sub-weapon, two shot types and a shield. The power-ups — eight coloured triangles and squares — are unique in appearance but inexplicably lack a translation of the Kanji they’re inscribed with. This makes it several times more challenging for non-Japanese readers, who will need to memorise their functions. Some important power-ups include the red reverse triangle to increase the game’s speed; the purple icon to refill your shield gauge; the red square to increase attack power, and the essential green square for a slight energy top-up. Once you start to get an understanding of what the power-ups do, and how you can change their properties by swiping them with your sword, Radirgy Swag has an enjoyable score-challenge to get your teeth into.

It looks like a shmup and smells like a shmup, but it doesn’t much play like one. Bullets are too fast to dodge, leaving you to either erase them with your shot or absorb them with your shield. The idea is to increase your speed by grabbing relevant power-ups, in-turn increasing the number of on-screen enemies and bullets as much as possible — and then ping your shield button with reckless abandon. At higher speeds, point-blanking larger enemies and absorbing dense bullets spreads almost instantly refills your shield, letting you trigger it in unbroken cycles. Although speed boosts are temporary — and require chaining to get up to maximum velocity — learning to prolong these periods of invulnerability is the crux of the game: a plate-spinning exercise whereby you attempt to manage everything in tandem while increasing your survival duration. There’s no guarantee you can constantly land speed-ups in succession, adding a little RNG to proceedings — but when you do manage to string a few together, you’re plunged into a state somewhere between anarchy and harmony: a kind of high-gear, dice-with-death dance. In the thick of it, triggering shield after refilling shield, camping on top of large enemy craft, sucking up power-ups and seeing your score multipliers rise, Radirgy Swag hits its peak buzz: a regenerating flux of successful surviving and scoring. 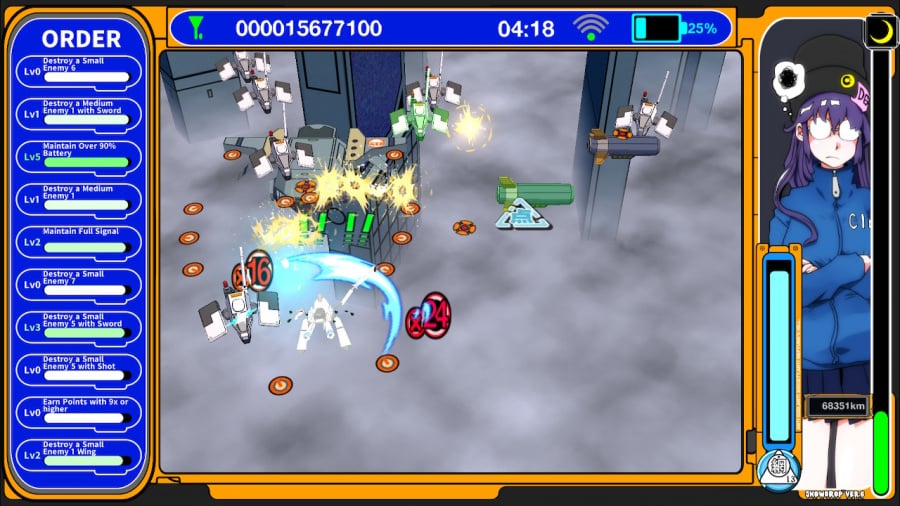 The result is a somewhat malleable affair that ebbs and flows from the relatively relaxing into fraught, point-heavy rushes. You need to unlearn your historic shmup programming before you can get into it, and appreciate that it’s designed for players dedicated to demolishing scoreboards with high-grade digits. Beyond that, there’s not much else on offer.

Radirgy Swag’s adrenaline doesn’t come from thundering boss battles or beautiful environmental segues and highlights, but from learning to drive the game like a Ferrari strapped with shuttle rockets. Its brevity plays well in this respect, and although it’s not far off the average ballpark duration of most arcade shmups, its length does encourage repeat play-throughs. There are plenty of bonuses to acquire, too, that allow you to adjust the game’s parameters. These range from increased bullet speeds to a Space Invaders homage that restricts your ship to horizontal movement.

There are walls here that require a little effort to overcome. Pinning down the power-up lottery and keeping an eye on your various gauges takes work. For the most part, shmup fans will either love it or hate it: and this divisiveness is very much Milestone’s legacy. While respect is deserved for their unorthodox approach to an age-old arcade genre, not everyone will jibe with the concept or the limited amount of game on offer. It’s also worth noting, that, owing to constant shield and sword slashing, it’s absolute murder on your right thumb in handheld mode. An arcade stick or Pro Controller are much preferred peripherals in this respect.

Although rough around the edges, Radirgy Swag will please existing fans, certainly win some new ones, and probably land cold for everyone else. It was never expected to be a mass market hit, which is why it’s a positive that the series has found a western audience, small as it may be. If you’re a shmup fan looking for something out of the ordinary, its system of power-up juggling and reckless shield regeneration might just be your ticket. It requires some initial legwork, but once it clicks it really cooks.

Previous: Halo Infinite Developer 343 Industries Is ‘Focused on Reducing Pricing’ for In-Game Items
Next: The Tomorrow Children’s Relaunch Can Feature An Island Of Your Creation Via A New Contest