For any new home invaders in our midst, Secret Neighbor is an online multiplayer social horror game where the goal is to work together with other players to get into your suspicious neighbor’s basement. This isn’t just any senseless breaking and entering though, he’s hiding something and it’s up to you and the other kids to find out what. There’s only one problem, one of your friends is the neighbor in disguise…

With the most festive of holiday seasons just around the corner we’ve got some special surprises to drop under the tree, and you won’t even have to wait until Christmas day to unwrap them! So let’s dive in!

The Undertaker is Now Available in WWE 2K BattlegroundsWritten by Smurf
December 18, 2020

Do you want to build a snowman? ❄️

There’s nothing better than waking up to a snow day, and it looks like Raven Brooks has gotten its first snow of the year! In this winter update you’ll find the spooky decor swapped for something with a little more holiday cheer. The halls are decked, the gifts are wrapped with care, and you can deck someone with carefully wrapped gifts… wait.

Possible personal injury cases aside, we invite you to engage in more chilly shenanigans by building a snowman. You can create up to four sizes of snowballs, and can use these to build your own snow-army… or you can throw them into the faces of the nearest unsuspecting player. Your call.

Speaking of throwing, what’s a holiday season without snowball fights with your friends? So grab a couple of snowballs and send ‘em flying! Just be sure to hop back indoors and warm up every so often.

No we didn’t get you a pony

Snowballs and snowmen are cool, but they aren’t the star on top of the tree. We have a special present for all our OG Hello Neighbor fans and lore hounds this year and it comes in the form of a new map! The new map is based on the neighbor’s house from Act 1 of Hello Neighbor and… the basement is open?!

We know you’ve always wondered what is actually in the basement, and now you can see for yourself! Explore the Peterson house and creep through the basement for more clues. But just because you’ve made it to the basement doesn’t mean the story is over. If you know what you’re looking for it may help to shed some light on the neighbor, Nicky’s disappearance, and the bigger mystery of what is going on in Raven Brooks. But be careful that you don’t wind up with more questions than answers.

Bundle up boys and girls!

Of course with every holiday update there are plenty of new cosmetics to nab. This year we’re bringing double denim back, and we’re not in the least bit sorry. You can find a set of denim digs for every kid class, as well as a few new standalone outfits for them. The new Butcher Neighbor class also gets a bit spoiled this update with a couple of new outfits!

We’ve got lots to unwrap this holiday season so keep a sharp eye out, stay warm, and we hope you enjoy the new Secret Neighbor Winter update! 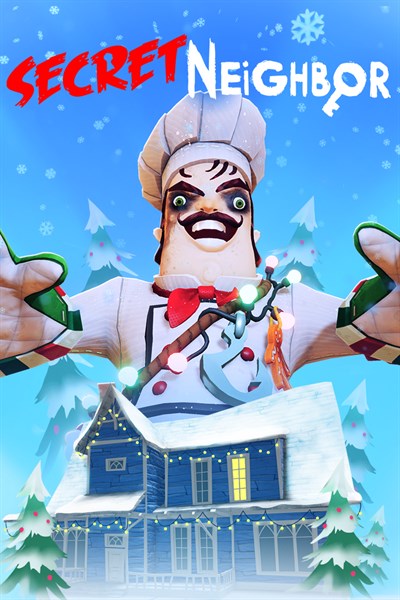 A group of kids are trying to break into their suspicious Neighbor’s basement to rescue their missing friend. Only problem is that one of the kids is a traitor – a Secret Neighbor in disguise. His job is to gain the trust of other players and betray them. Kids win if they get into the basement.

Playing as a child:

If you are lucky enough to play as Neighbor:

– The house is your territory! Use it to separate, scare and confuse intruders.
– Use your gadgets to get advantage over the kids’ team.
– Gain trust amongst your foes and attack in the right moment.
– Protect your basement!

Next: The Undertaker is Now Available in WWE 2K Battlegrounds