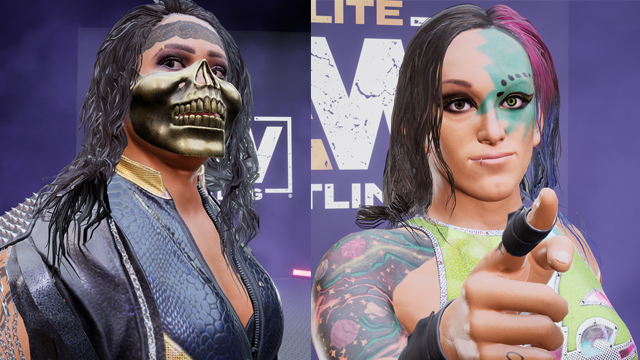 
Wrestling company AEW has announced that their upcoming console game will officially go by the name AEW Fight Forever.

Wrestler Evil Uno made the announcement via the AEW Games Twitch channel in a special presentation last night. During the broadcast, he also confirmed that the game will be launching on PC as well as consoles. In addition, he also confirmed two more of the promotion’s roster whom have made it into the Yuke’s developed grappler.

Evil Uno, Adam Cole, Aubrey Edwards and Kris Statlander showcased some fresh new gameplay featuring the latter and Nyla Rose. Statlander and Rose join the previously confirmed Chris Jericho, Owen Hart, Darby Allin, Jungle Boy, Kenny Omega and Hikaru Shida in the game’s collection of grapplers. One prominent wrestler who won’t be in the game would be Cody Rhodes. Despite being a regular fixture at previous reveals for the game, Rhodes recently re-signed with rival promotion WWE at this year’s Wrestlemania.

There’s still quite a few details we don’t know about AEW Fight Forever, of course. Most obviously we don’t have a release date or publisher announcement just yet. Play Diaries reports that, according to paywalled newsletter Fightful Select, THQ Nordic may be involved. That’s the publisher ran by Embracer Group who recently purchased a big chunk of Square Enix. However, neither company has confirmed this at the present time.

Yukes was formerly the developer of the WWE games, until its split from 2K Games in 2019. 2K would go on to shift development over to Visual Concepts for the much-maligned WWE 2K20, but after taking some time off redeemed themselves with this year’s much more warmly received WWE 2K22.

AEW Fight Forever hopefully won’t be too far off in the future. We’ll let you know if we hear of a release date.

The Undertaker is Now Available in WWE 2K BattlegroundsWritten by Ben Borthwick
May 5, 2022